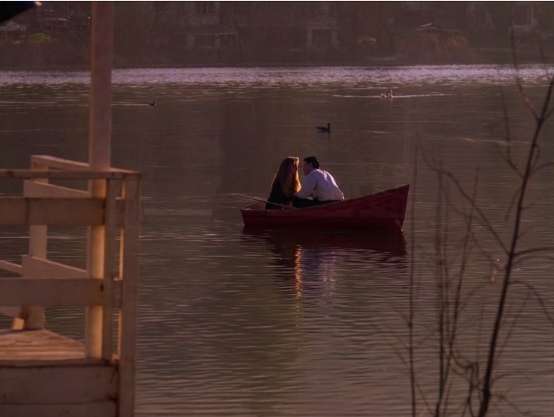 (The first scene I remember clear as day.)

I had heard rumblings about this show for years. I had heard it was quality drama; I had heard that Holly Marie Combs from Charmed, my favorite show as a teen, was on it for a while. It was Picket Fences? I wanted to try it but somehow I had forgotten the title, so when I saw a show on an obscure and small horror cable channel named Chiller, I thought it was the one I was thinking of.  I noticed they were having a marathon during one snowed-in weekend in January 2009 and I decided to tune in, and I was at the same time lost and intrigued. The show…Twin Peaks? I had confused the titles and tuned into the wrong show. I never did go and seek out Picket Fences as of yet!

My progression from newbie viewer to fan to admin of a Twin Peaks Facebook group, friend to other fans, and someone who gets cited and writes articles about the show is wonderful, strange, backwards and completely, completely Lynchian! Let me begin by starting that I am a youngin’ amongst the fandom. I was born in 1986; so when the first two seasons aired I was 4. I couldn’t have watched it when I was a kid, especially with a Mom who held strict bedtimes as one of the gold standards of good parenting.  I did hear about it here and there during the course of my childhood, but nothing so distinct that it stuck in my head as something that I simply must see. After all, if it did stick in my head it would never have been conflated with Picket Fences, right? I may have remembered, in retrospect, reading somewhere that Leland possessed by BOB killed Laura, but that was only really remembered after the fact.

So, here comes 2009.  I tuned in. There was a cute story involving that guy I saw a few times on various shows falling in love with a waitress. A few of the middle aged citizens of the town looked familiar, (later to be discovered as Russ Tamblyn and Richard Beymer from West Side Story). There was a lady with an eye patch who was a high school wrestler. There was something with a cave drawing. A girl was missing a guy named James and wondering something about her mom.  I was so confused. I figured that I caught an episode somewhere in the middle of the story and I figured that I’d catch up. What I didn’t know was that I caught it at the tail end of the series itself and that it only lasted two seasons. By my estimate, looking back on it, my first episode must have been either “On the Wings of Love” or “Variations on Relations.” Yes, I was that far in and that far lost. Then came what I later would learn was the finale, and the Black Lodge scenes definitely confused me and I wasn’t sure if it was in the right way.  It left me sort of negative for a while. Perhaps because I didn’t have the previous episodes’ that dealt with that sort of thing to rely on to get me in the right headspace for “Beyond Life and Death.”

Always having an open mind, I decided to give the show another chance. I noticed Chiller did several weekend marathons of various horror shows through the month. The next time Twin Peaks cycled around to being the feature marathon show, I tuned in.  This time getting a story of a girl wrapped in plastic and the whole town mourning over her. Dale Cooper came into town. So I figured out, being a smart woman, that I caught the beginning of the series. I caught a few episodes more throughout the weekend.  And every time I saw Chiller do another Twin Peaks marathon (they usually occurred once a month during a select weekend, 42 hours-ish of Twin Peaks), I watched just to fill in the gaps. Since I had a DVR, and was heartily sick of watching it in bits and pieces, I recorded the whole series and watched it back to back one weekend just to get the whole picture.   At that point, after several go-arounds I was hooked by process of osmosis. (Here I’d put a grin emoji if this was a text!)

I had a few theories about what went on.  I don’t think I was ever shocked during Lonely Souls for some odd reason.  Perhaps coming in at the time that the Palmers were already irrelevant to the story, I figured they’d have to go at some point.  I felt sorry for Leo when I first started watching and was completely gutted to see how terrible he was at the beginning of the series.  I thought Audrey was a little too drama queen at the beginning and I liked her more when she was the business woman at the end. I loved the sheriff’s station people. Not knowing that he was played by the co-creator of the show, I found Gordon memorable (ironically Albert wasn’t!). I liked Cooper, Norma, and Annie.  I figured that the Lodges had to be a Native American version of the faery realms which I was interested in reading about when I was a 20-something into mystical stuff. The faery Seelie and Unseelie courts matched the dichotomy of the White and Black Lodges perfectly. I thought Bob was an evil faery tied to Leland in some way.  I had theories about how BOB and MIKE came to be Lodge beings.

But I didn’t have anyone to talk to about the show.  I didn’t know if anyone even remembered it, it since I found it on the aforementioned obscure cable station.  So I felt a little alone. I knew my parents wouldn’t like being introduced to it. I tried to pique an ex-boyfriend’s interest but he only heard Log Lady and made fun of it…I guess the writing was on the wall that early in our relationship that he would be an ex.  (We lasted a month or two after that conversation.) Though I kept on watching. In October, Chiller aired Fire Walk With Me and I hated it at first, as it was a little too anger inducing for me. I was so angry at Laura’s tortured life. And the Convenience Store scene was a little queasy for me to see.  So I didn’t watch it often when it was on. But boy, I devoured the series.

Then suddenly in late 2010 or very early 2011. They took it off.  I couldn’t find it on Chiller at all. I kept vigilant for a few months but gave it up as gone.  A few months later, I was in need of reading material so I went to the library and while browsing the shelves, I discovered a book called The Secret Diary of Laura Palmer by Jennifer Lynch.  I said, “It can’t be!?” I took it from the stacks and flipped through it and found that it was. Now, you should know that I rarely sit down in the library and begin to read. I prefer just grabbing my TBR stack (quite literally a stack) and leaving.  I started to read it then and there. I ended up reading it twice or three times during the borrowing period. I also found a copy of Fire Walk With Me and rewatched it, actually liking it for the very first time. But having to return both, meant that I was bereft again.  I didn’t know that a DVD of the series existed, only FWWM and I wasn’t so in love with it so as to buy it just yet. So I was alone for years. I followed the official Twin Peaks Facebook page, but I didn’t know anything or anybody concrete was actually out there. It was a sallow time.  I watched Blue Velvet and Dune during the intervening years liking Dune as I’m a Sci-fi nerd and loathing Blue Velvet as Frank disgusted me and I hated the movie simply because of him in it.

Then in 2014, I saw the tweet that thundered throughout the world. And I was so exhilarated that I screamed and shocked my parents (I am still living with them and they humor me to the point that mom watched three whole episodes before saying that it was definitely not her cup of tea. She hated Leo and could stand to see his face at all on screen.)  I kept Googling from time to time to see if there was any news. Besides a few odds and ends, like Lynch quitting and resuming participation in the production, there was so little that I was hanging on to every piece of information that came out. I had forgotten most of what went on from the series and the film so I checked Showtime’s scheduling routinely to see when they would re-air the original stuff…they had to, right? I still didn’t think of checking to see if DVD sets existed.

Finally they started re-airing the series and the film and every memory and more came roaring back!  Especially interesting was me asking repeatedly, who was this man, and why haven’t I ever noticed him before?  I had fallen in love with Albert Rosenfield. (Much to my sadness, after finding out that the actor who played him was one of the ones that passed).  I read the Secret History in one sitting and I reread the Diary. And figuring I wanted more connection with Twin Peaks fans and news updates, I decided to join a Facebook group, the third fan type group on Facebook I’ve ever joined. It was at the time called Twin Peaks (2017), and I was a mild participant on the board, definitely not loud enough to make waves I thought. I enjoyed most of Season 3, but then Parts 17 and 18 really turned my stomach. I didn’t like the ending at all. Awhile after Part 18, one of the admins thought to start the original series again as a rewatch, so I decided I needed a palate cleanser. I joined in on rewatch threads where I suppose I caught the attention of one Carl Hershberger, (the founder of the Group) who asked me to become a mod. I said yes, a little nervous for the responsibility and not wanting to let anyone down. But then gradually I grew to love the admins and mods. I became an admin and friend with many of the members. I went to my first event in Fayetteville (where I had a particularly touching encounter with Charlotte Stewart) and want to go to more events now. And here we are. From very confused newbie all alone, to someone who has friends in Twin Peaks fans and writes for a Twin Peaks blog. It has been a weird and wonderful journey and may it only continue.