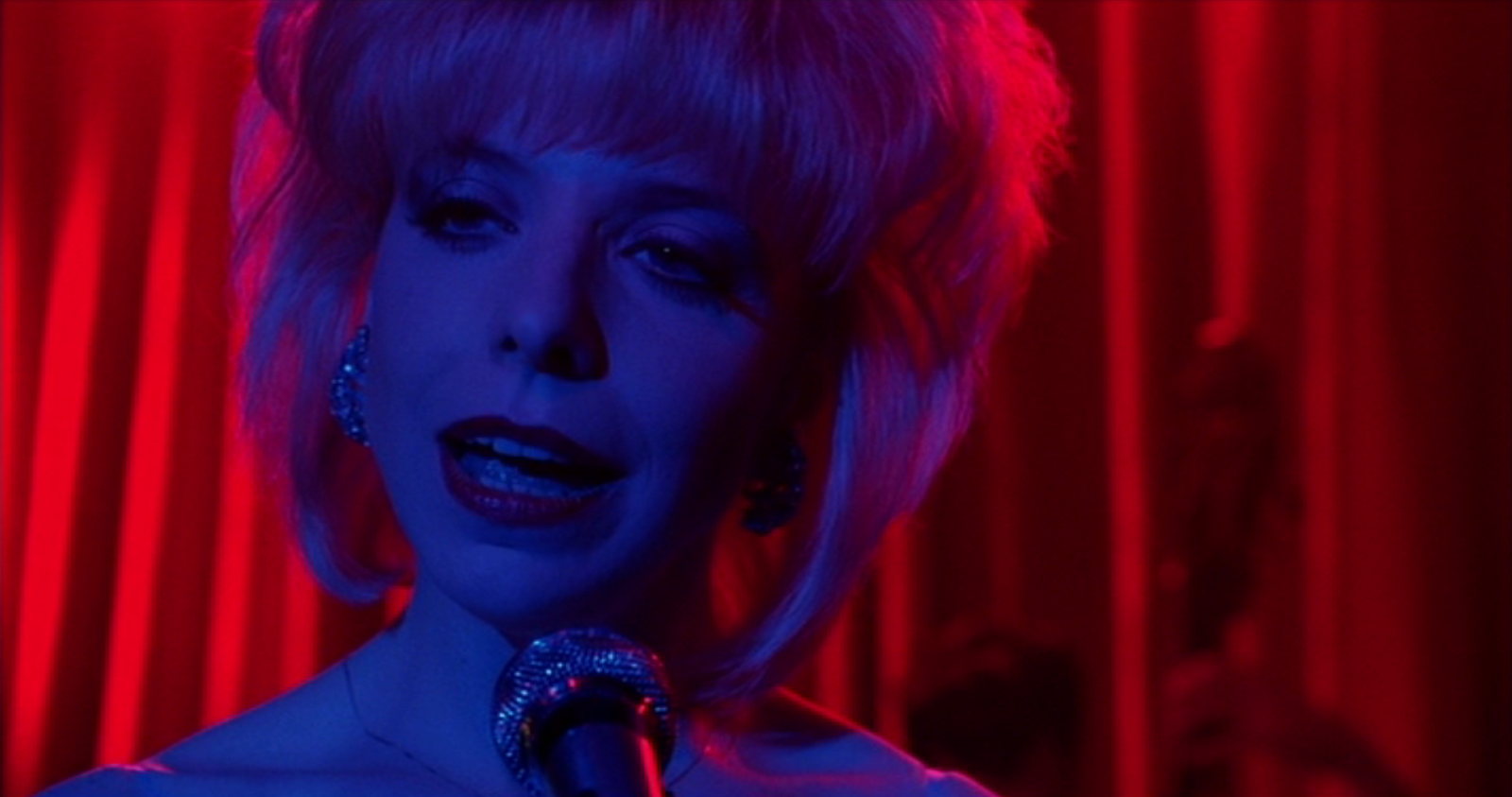 When all the world / seemed to sing / Why, why did you go?

How can a heart / that’s filled with love / Start to cry?

When all the world / seemed so right / How, can love die?

When did the day / with all it’s light / turn into night?

When all the world / seemed to sing / Why, why did you go?

I have been rewatching Fire Walk with Me quite a bit lately when suddenly, I caught something.  The lyrics of “Questions in a World of Blue” really called to me. It was full of questions for Laura to ponder about herself; it was making her examine her life up to this point. I came to the realization that this song is truly a Twin Peaks “Spiritual.”  Now I’m not going to be proselytizing any religious worldview, so no concerns here. I just noticed the spiritual dimensions of the song and how it kept on asking Laura to turn to the light, to return to goodness.

Moreover, the people Laura encounters before this song are also trying to turn Laura back to the Light.  Donna came to Laura’s house to remind her of her innocence as her innocent best friend. But Laura doesn’t listen.  She goes to the Roadhouse. Before she could even get in, Margaret Lanterman came up to Laura to remind her that “When this kind of fire starts, it is very hard to put out. The tender boughs of innocence burn first, and the wind rises, and then all goodness is in jeopardy.”  Mrs. Lanterman is our prophet; she reminds us of what the Light expects of us, to be good. (Not nice as BOB constantly orders Laura to be. Nice is sometimes a false ‘goodness.’ Being Good sometimes means not being at all nice.) She reminds us to always struggle and vie against the Darkness of the world.  In one of her last prophecies, Mrs. Lanterman resounded the necessity of Goodness: “Electricity is humming. You hear it in the mountains and rivers. You see it dance among the seas and stars and glowing around the moon, but in these days, the glow is dying. What will be in the darkness that remains? The Truman brothers are both true men. They are your brothers. And the others, the good ones who have been with you. Now the circle is almost complete. Watch and listen to the dream of time and space. It all comes out now, flowing like a river. That which is and is not. Hawk. Laura is the one.” (Emphasis mine.)

By this point in the narrative, Laura is turning further and further away from being Good.  (Remember, not nice, she doesn’t have to be nice to be good; Albert proves that point in abundance.) In attitude, she’s been making fun of Donna more and more, by requesting that Donna plays her violin while Donna is extolling the virtues and the qualities of James Hurley.  She’s been warping her own relationships with Bobby, James, and Harold. And that’s just the tip of the iceberg. Leland, it seems, is assaulting Laura more openly now, right in front of Sarah. Could it be that the hand-washing scene was becoming more and more normal at the Palmer residence? Then at a breakneck speed, Leland comes into Laura’s room to say he loved his little girl, but note that he never said he was sorry.  So this is a confusion for Laura, making her mind turn further and further inward and further and further clouded in chaos.

Supernaturally too, Laura’s life is getting darker and darker.  We saw her face turn horrifically, demonically, ghostly pale at Harold’s.  We saw her getting possessed under the fan. We have Laura having her dark dream.  So by this point, BOB’s wish of him possessing her totally is coming to fruition easier and easier.  Laura is even losing hope at this point as she’s thinking that she’s falling faster and faster and the angels are all leaving her.  She is becoming discouraged.

So in good mythological style, the hero(ine) gets three warnings from three women to return to the right path.  Thus we have our messengers show up at the right time. Donna was the first, reminding her of her ties to the innocent side of Laura.  The second was the Log Lady herself, reminding Laura that she still has time to put out that fire. The third was this song. So let’s parse out what message this song is trying to send Laura.

“Why did you go? Why did you turn away from me?”  This song begins with a question for Laura. Why is she going and turning away from the Light?  She ran away from Meals on Wheels, her responsibility to help others, to find out who BOB is at the instigation of the most morally grey characters of Twin Peaks, the Tremonds.  Why did the Tremonds choose that moment to give Laura the painting? Was it the chance to divert Laura during a mission of good? Could it have been that making her so eager to find out the truth of who was using BOB’s face would turn her away from the other responsibilities she had to others, responsibilities which would improve the world around her?  She is turning further and further from the good person we know she is.

“When all the world starts to sing, why did you go?”  The world is singing at Laura and continuing to ask her why she is going away from the Light.  “How can a heart that’s filled with love start to cry?” This lyric is reminding Laura of how much love is in her heart.  She does love Donna. She does love Bobby, James, Harold. Further shielding her heart and making herself invulnerable is not a good thing at all. “When all the world seemed so right. How, can love die?”  The key word in this lyric is the word “seem.” Anything could seem right. The song is reminding Laura that her world isn’t right, it only seems that way. The Light is dying within her and Laura must fight to keep the Good Fire of Hawk’s map alive.  “When did the day with all it’s light turn into night?” The Light is reminding her how obsessed with nighttime Laura is becoming. “When did you become so interested in what I do at night. Nighttime is my time.” When was the moment that Laura turned into a Creature of the Night instead of a Daughter of Day?

Then the Light keeps on asking her “Was it me? Was it you?”  Did I abandon you? Is there a way that I can come back into your life again?  Or was it you that left me and can you ever return to me?

No wonder Laura keeps on crying during the song.  She is being confronted with a message from beyond.  She is being confronted with the truth of who she is becoming.  She is taking her wounds and becoming a darker person, embracing the Darkness.  In one of my previous articles, “BOB: The Worst Both/And,” I mentioned that BOB always called Laura by her worst qualities, which kept her involved in them, thinking she was only the worst sides of herself, only her dark side.  The light was reminding her of how she can be a better person.

Unfortunately, the wooing of Evil is much stronger.  Laura does make the choice to prostitute herself to Buck and his buddy.  She does get Donna involved in her sordid side and make fun of Donna for being such a downer (according to the Missing Pieces scene).  She does go to the Pink Room.

However, the moment that Laura sees Donna becoming just like her is a wake up call for Laura.  She is reminded how “good she is” what potential for “good” she still has inside of her. She goes and rescues her friend instead of making fun of her with Ronette. (Remember, Ronette said rather snidely, “Oh, Shit is that Donna Hayward?”)  Then the next morning, Laura is kinder and much more gentle with Donna. She is reminded of her love for Donna. In fact, after this incident, we do see a kinder and gentler Laura emerge. The kind and gentle Laura we know is there because of the Diary. We see the silly teenager come out of her in the scene in the woods with Bobby.  This is the way that Laura should be, silly and making fun of life. She should be giggling and giving Bobby wet willies.

Perhaps that is the reason why Laura was saved at the end and why she didn’t let BOB in, because this song, and the other women before it, reminded Laura of who she really is, the Daughter of Light.  One of many good souls that were emanated by the Fireman to be the ones who fight against the Darkness.