Posted on October 29, 2021 by pamelatarajcak

In Season 3, it is very interesting that, besides the Sheriff’s department personnel, two of the first characters viewers are reintroduced to are the Horne Brothers.  One seems to have moved on from his past, Ben, yet having a miserable time at it.  One however is delightfully the same, Jerry.  Though it would seem that Ben has the worse lot, he doesn’t.  Sometimes moving on doesn’t mean having a totally happy life.  Sometimes it’s a calm acceptance of one’s lot in life.  So Ben has accepted his life alone and sad because he has grown up.  Jerry hasn’t.  He has stuck himself in that perpetual childhood that he loved. Yet he is lost in the woods; he is afraid, confused.  He hears voices emanating from such ridiculous locations like an appendage. His plans for a wonderful walkabout ruined by his own ‘stuck’ nature.  Both men have tricked viewers by their movements throughout Season 3.  Because they are reintroduced virtually first, Ben and Jerry seem to be the ones who will reflect the fates of the two main characters of Laura and Dale.  Ben reflects Laura’s fate and Jerry reflect’s Dale’s.  Through an analysis of the Horne Brothers scenes it will become prevalent.

The first scene of Season 3 Episode 1, Ben is trying to conduct business, real business, and helping customers.  A very competent female assistant, Beverly Paige, aids him.  He is neither harassing or patronizing of her.  It seems crazy that Ben is not talking down to her, sort of like he did to Louie “Birdsong” Budway in Season Two.  Then Jerry comes in smelling of the skunk about which the customers were complaining.  Jerry’s new business venture concerns Ben who also inquires about mother’s hat.  The Ben of the Original Series would have at first chided Jerry but in the end, joined in on Jerry’s fun.  In this scene, Ben is only offering concern and no enjoyment of Jerry’s antics.  He doesn’t even like how Jerry called Beverly a girl or his insinuation that Ben should harass her.  Ben respects Beverly too much.  It is at this point that Lynch and Frost lull us into what viewers should think. Fans are both happy to see Jerry back to his zany antics, a needed normalcy, but are also happy to see that Ben’s reformation continued, a needed change.

Throughout rest of the episodes, the two brothers’ paths diverge (one quite literally in a wood). Ben continues his path to redemption in his legitimate business.  There are no trips to One Eyed Jacks anymore.  There are no bad and unscrupulous business deals with anyone.  He is simply running his hotel, no matter how dull the day turns out to be.  He respects women, no matter how attracted he is to Beverly–and no matter how much she wants it.  He only asks her out once, and in such a tone of voice (almost whispering) that it’s quite possible he never really wanted her to hear him.  He investigates the weird sound but as long as it’s not an issue that would bother the customers or hurt the operations of the business (quite unlike his very disruptive behavior as Confederate Ben), he’s willing to let it go.  Ben and Silvia trapped themselves in a horrific marriage.  Perhaps Ben had forced Sylvia to stay married to him for “respecability’s sake.”  But Ben and Sylvia have divorced and Ben is still maintaining Sylvia’s lifestyle (because of course she’s unemployable).  The Old Ben, maintaining his power over people, would have cut Sylvia off, not even caring about Johnny.  Though Ben cannot give extravagantly anymore as he isn’t the biggest of wigs, and has to set a “giving limit,” it seems like has given extravagantly until Sylvia asks for too much.  Ben has Frank’s respect as he had never had with Harry.  In his final scene, he is quietly minding his own business when the phone rings and it’s a police department in Wyoming.

In much the same way, the viewer is tricked to believe that Carrie’s lot is worse than Laura’s. Though she was confident and accepting of her fate, there was a darkness over Laura that pervaded her very existence. There is no silliness of “Should I take a coat?” in Laura which is why, in Fire Walk With Me, when Bobby and Laura are in the woods, it’s so refreshing to see her act like a silly teenager.  She had her joy back for almost one moment. Laura attains eternal joy when she gets her Angel and returns, merely for a visit, to the Lodge and reveals her light-filled face. No matter the method of how Laura becomes Carrie, she does change.  Carrie’s life is smaller, sadder, and distinctly more unglamorous than Laura’s.  Carrie is not happy in her life, but she certainly isn’t haunted by anything.  There seems to be something almost “normal” about Carrie, even though the presence of a body on her couch is weird.  If she’s okay with it, we’re okay with it. She is wary of Dale showing up, but suddenly is cool going with (though she does need to get out of Dodge for a bit) even enthusiastically asking for advice about what to pack.  The waitresses at Judy’s seem to think it strange that Carrie didn’t show up again for her third day in a row. She only gets agitated and haunted whenever she is nearing Twin Peaks.  The shadow descends on her more and more as the pace quickens to the white house.

So like Ben, Carrie/Laura has become better.  She seems accepting of her life though it is not ideal.  She seems to be the type to power through the troubles just like her preceding life did, but in a less haunted way.  Perhaps the poverty of Carrie’s life was not as plaguing as life with Leland/BOB ever was.  Perhaps Carrie had a wonderful childhood which allowed her to grow up happy and this recent turn, though very unhappy, was cushioned by the happier childhood?  So like Ben who had become better yet sadder, Laura as the reincarnated Carrie has become better yet sadder.  Though his life is in shambles, he accepts it.  Though her life is in shambles, she accepts it.  Though his work is not as enthusiastic as it once was, he still plugs away.  Though her life was not as varied as Laura’s once was, she still plugs away.  Nothing is horrible until she gets dragged back to a previous self by someone who hadn’t done the work and progressed.

Jerry on the other hand wanders lost and alone in the woods.  He hadn’t been known as an outdoors man in the Original Series because his many trips abroad were to metropolitan environments.  Jerry does have wanderlust, but because the Horne family lacks the funds, Jerry has just transferred his wanderlust to a more local milieu.  Though the substance that he admits to having is legal and undangerous, he may be taking some other completely dangerous substances with how he panics over “being here before,” hears his foot disown him, and stresses over a “stolen car.”  He repeats his movements quite a bit.  He watches Dr. Amp’s videos which had changed Nadine’s life so beautifully, so Jerry could be bettering himself.  Unfortunately with the way he reacts, it is probably more confirmation bias for him. Perhaps he doesn’t think he has any “shit” to shovel himself out of?  Though that isn’t the case as he’s lost, alone, confused and perpetually running from something. The last time the camera captures Jerry, he is blaming the binoculars for witnessing his nephew’s demise, and not particularly knowing which end is up. He continues running away from his problems, in a further panic, resulting in a night, naked, in a jail cell in Wyoming.  Ben has to ride to his rescue. 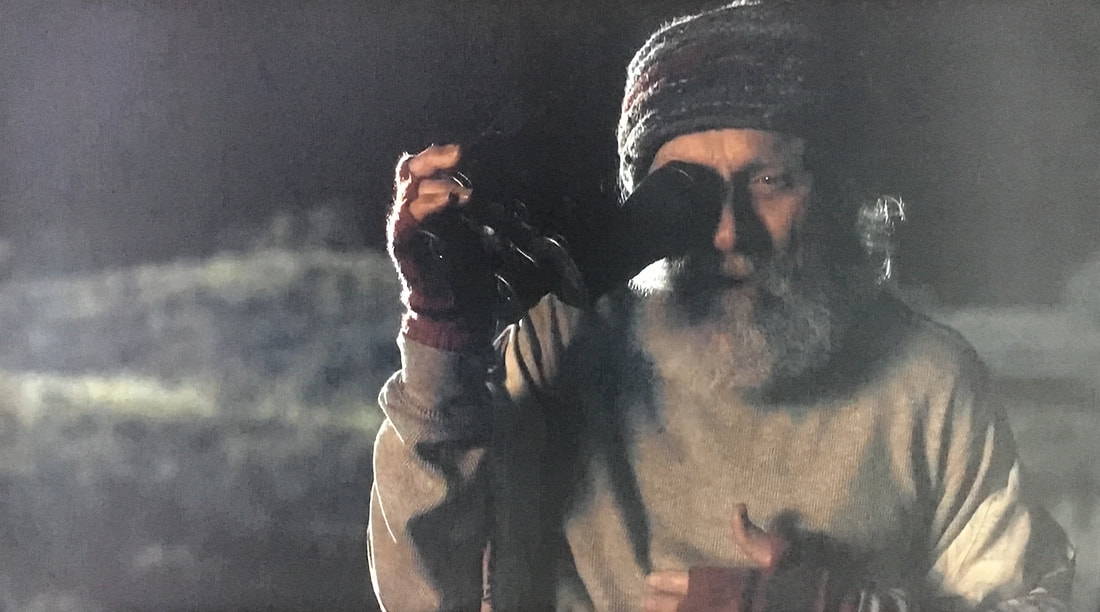 Dale is stuck in the Lodge.  He has lost himself as Dougie Jones.  Though highly entertaining as he wanders around Las Vegas as Dougie, it is frustrating that Dale is taking so long to become himself again. By the time Part 17 happens, he is again losing himself in the same old trope that he’s repeated over and over again.  He is losing himself in an addiction. He feels he has to rescue people who are unrescuable or delve deeper into mysteries he needn’t delve deeper into. He repeats the same mistake of listening to the wrong people, Windom, the Arm, Leland.  He always thinks he is constantly on the right path though he always ends up in the wrong place, because, perhaps, perhaps he is not on the right path. He constantly an ouroboros, eating his own tail to spite his body.

Ben and Jerry.  Laura and Dale.  Two end up in an acceptance of their fate and their better and new life no matter how sad it could be.  Two end up constantly reliving the past in order to “feel better” yet never moving on and dragging those with them backwards perhaps innocently but still plagued by their own mistakes.